Something else that happened in 2003 was a visit from Hurricane Isabel. Not to be outdone, this late-summer brought us Irene. The bottom of this twig heart fell like that; I had to create the top. I'm not sure what plant that heart-shaped leaf blew off of. As we picked up in the yard on Sunday morning (a 90 degree day with hundreds of thousands in metro-Richmond without power? Whew.), I noted that there's a nature discovery activity possible by tallying leaves from species that aren't in our own yard - that blew in. 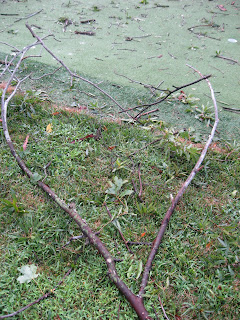 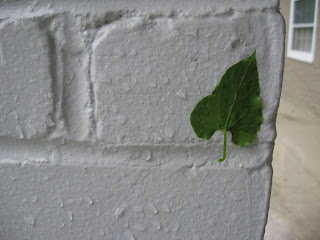 This year's tremble found me on the reference desk at Dumbarton, trying to prioritize (oh crap: aftershock) ... trying to prioritize: tell people to get out of the aisles of books first or away from windows first? Also of concern: people had been waiting for public PCs a minute ago: would the people who stayed inside immediately grab the computers of people who moved to flee the building -- and would I have to mediate that? By the time I took a step to move towards the man who seemed to choose the bookshelf aisle, it had subsided. It felt loud: "skateboarding on the roof?! No, banging the book drop?! You kids... Oh, wait. I felt this before."

As in 2003, I relied in the US Geological Survey's website: I told the mom using a computer Yes, that was an earthquake: you can go to this website to show her more. I finished circling the room to check stuff, told a man whose often too that it had passed and he if wanted to keep talking loud maybe he'd like to go outside (unspoken: 'cause I know hour are on hour 3 of your 2 hours / person / day on a computer). Back at the desk a woman smiled and announced that she's 88 years old and that was her first earthquake! "I guess I will find out about it on the news tonight." - "Oh," I said, having torn myself from FB updates seconds before, "the USGS says 5.8, and look, here's the epicenter, between Richmond and Charlottesville - so, Louisa, I guess." "What do you know! And where's this library?" And so I showed her and she went away very pleased.

This year and in '03, I blogged right quick. This time, for work (not that we seem to have many kids using that site). Of course, not many people were reading my personal blog then (fewer now), but FB really connected me fast today (which I've always sort of held against it). When people first raved about it, I always thought, "but my blog does those things." Not well enough, obviously. 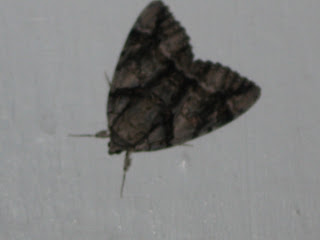 Winged Heart
Couldn't get close enough to this little critter, on the window frame that's over the stairwell for the basement, and a storm's abrewing so the light stinks. What's interesting is that it struck me as a heart as soon as I spotted it.
Posted by Lisa at 4:11 PM No comments: 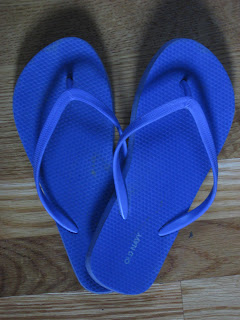 Garden Flip-flop Heart
Though I adamantly oppose the wearing of flip-flops outside of casual, recreational settings (pool, camp showers, beach house deck), I like them for puttering around the garden or taking out the trash. With the youngsters wearing them all the time, it's harder to get them at out-of-season prices, but these were cheap -- and they are more purple in real life.
40/52
Posted by Lisa at 7:02 PM 1 comment:

Email ThisBlogThis!Share to TwitterShare to FacebookShare to Pinterest
Labels: 52 hearts

Once, I participated in an awareness exercise that included the challenge to complete the sentence "Black fathers ___." And the group the group talked about various images that arise and how one manages oneself in the face of any negative images. At work for the past several years, every single day I see dozens of kinds of dads: black dads, Asian dads, white hipster-dads, Spanish-speaking dads, new Americans of all types -- all of them doing something interesting with their kids. You could take any of those generalized types and complete their sentence with:
- read with their kids.
- take their kids to soccer practice then the library.
- participate in baby story time.
- color with their kids.
- help their kids with their homework.
- pick out comic books with their kids (ok, sons).

You know what, though? I can't say I've ever noticed any two-dad families, or, for that matter two-mom families. But so much of the time, only one parent takes the kids to the library while the other gets time off or is schlepping some other kid or however it is families cope -- so, how would I really know?
Posted by Lisa at 3:16 PM No comments: 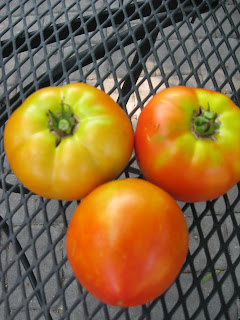 Email ThisBlogThis!Share to TwitterShare to FacebookShare to Pinterest
Labels: 52 hearts

Trying to cancel out the bad feelings from the 8 minutes of the day when there was no public PC access, I was the only librarian in the building, people needed the meeting room, a boy needed his summer reading prize. The computer outage went on for an hour, but stuff settled down. Mostly. 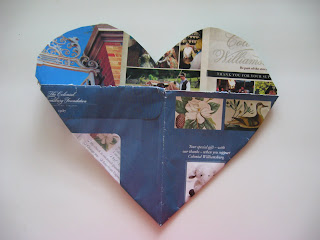 I do like visiting Colonial Williamsburg, and have been there several times in the last two years. Probably, I bought something with my credit card, et voila: regularly, I get note cards or stationery from CW's fund-raising wing as an enticement to make a contributions. The charities to which I donate are pretty well set. I am good about being firm. Yet this mailing promising a little stuffed toy lamb - to celebrate a heritage breed they are raising - really had me wondering if I couldn't spare another $35! Because stuffed animals are what a 45-year-old really needs. I roll my eyes at myself.
Posted by Lisa at 3:37 PM No comments: