The Four-Dimensional Human: Ways of Being in the Digital World, by Laurence Scott

The introduction and first chapter -- essay? -- present the meat of what drew me to this title. Scott asserts that smartphones and social media push us into a fourth dimension. We are often both with friends face-to-face while we connect to people online: we are "co-present."

Social media, for example, makes a moment four-dimensional by scaffolding it with simultaneity, such that it exists in multiple places at once. A truth and a cliche of digital life is that our comeliest meals occur both on our table and in the pockets and on the desks of our international 4D colleagues, a meal to be both eaten and approved of. (p. xv - xvi)


You're living four dimensionally when you are aware that n people are also tracking this eBay item, considering that same flight.

We're still shaping the etiquette of living four dimensionally: "one illusion that we're continually perfecting is not simply how to be here and there at the same time, but how to be there while looking like we're here." (p. 15) He offers the poignant example of UK's moment of silence on Remembrance Day: people lead a drive to extend it to online life -- and to achieve that goal, they had to be super-noisy in the fourth dimension to call for digital silence at the appointed time. Also, some automatic posts embarrassingly broke the silence (pp. 49-51).

He explores though an example how we feel when we follow an active, lively 4D acquaintance: "When we met in person I felt that see-saw of inequality that arises when in the presence of someone famous. I knew more about her than she me .... Such is the imbalance between the prolific social-media-ite and the silent loiterer." (p. 133)

"Fully fledged young 4D adults find it natural and efficient for ads to be (in the cosy language of marketing) 'targeted at you.' How crude it must seem to them now, this idea that television commercials used to some at us, in comparison, like grapeshot, rather than lined up through a sniper's sight." (p. 148)

We've all seen, he says, that digital screen destroy our sleep; we resolve to keep devices distant from the bed. "Except there's no landline now, sitting venerable on that little table by the stairs. What if someone needs us in the middle of the night. That is a call we should take. And so the phone stays resting on the nightstand...." (p. 168)  THIS

Ends with how we present our best selves online - we tell all, but not really. 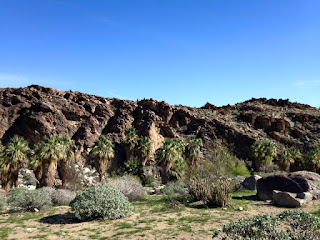 The BBF and I visited Palm Springs, California! I snuck in some birding. There were quite a few things I saw but could not identify -- warblers, sparrows, and hummingbirds. Very disappointed that I could not identify a single hummer! But look at all the highlighted ones for my life list! Here's one list for three days (backyard, small city park, Indian Canyon):